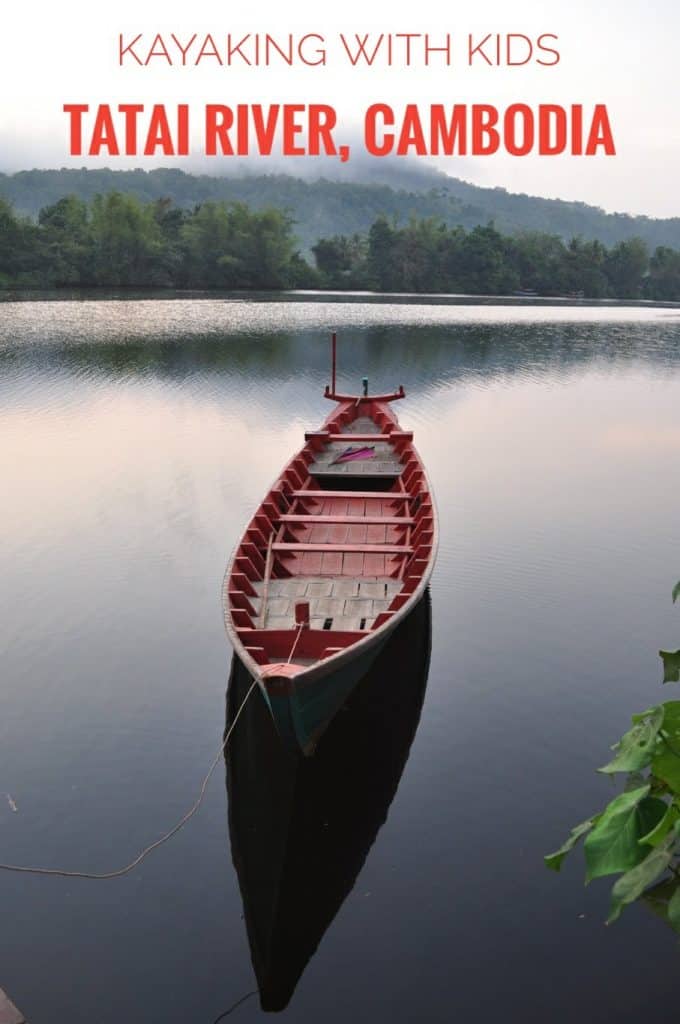 While it is for sure one of the most impressive temple sights we have seen on our travels there is so much more to Cambodia than temples. Venture further and go kayaking with kids on Tatai River for a unique take on the country.

Tatai is located in the South West of the country, not far from the Thailand border. It is quite remote and off the beaten path but don’t let that put you off. If you like rivers, waterfalls, jungle and chilling out you will love the Tatai River region. We were excited to have the chance to explore the waterfalls and river by kayak with the kids when we were there. 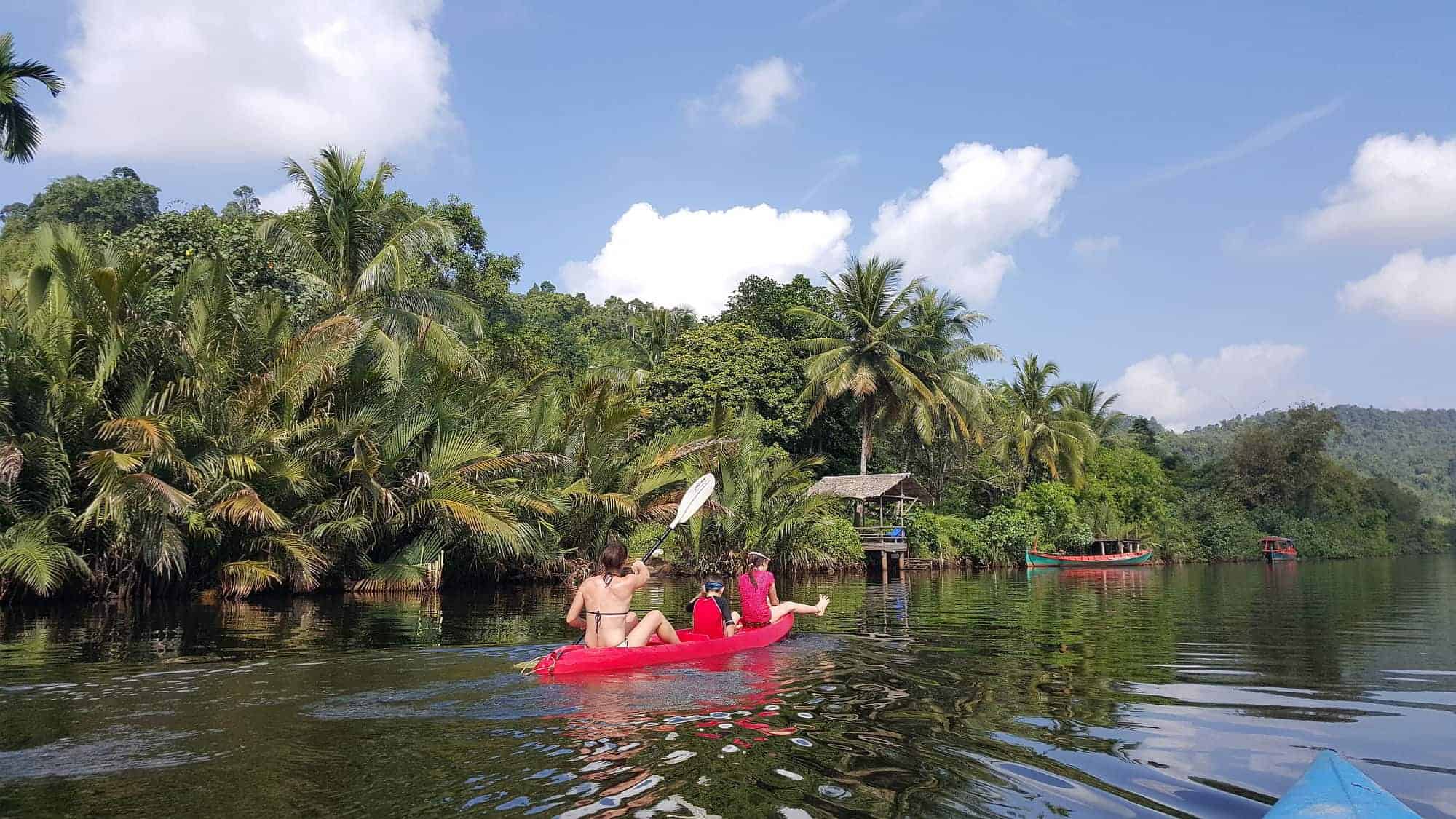 Getting to the Tatai River

As happens so often when travelling in 3rd world countries, the journey was a bit of an adventure. We travelled to the sleepy town of Tatai by road from Phnom Penh in a minivan with a private driver. After many hours of driving we arrived, crossing an enormous concrete bridge spanning the Tatai River.

Our driver pulled off the main road and drove down under the bridge by the edge of the river and parked. Here we found a little thatched hut with a small jetty but no-one around. It seemed a pretty sleep place. The driver called the lodge where we were staying to arrange a boat pickup and we waited.

Across the river a boat at the village jetty fired up its outboard engine and chugged across the river towards us and docked at the jetty. Our driver spoke with the boat captain and I could not understand what was said but it was clear this was not our boat – just a guy trying it on to earn a few bucks.

Anyway, after a couple more calls and some waiting our boat showed up and we said farewell to our driver and headed upstream. There were a few huts on the side of the river in set amongst palm trees in cleared sections of the jungle. Mangy dogs and chickens roamed around. Several kids were having a great time climbing the trunk of a tree overhanging the river and jumping into the river.

After a kilometre or two we stopped at another little jetty. We were met by a couple of guys from Rainbow Lodge, our home for the next few nights. They carried our heavy bags (thanks!) and led us up a narrow dirt path up into the jungle.

It soon turned into a boardwalk that led to a large open thatched roof common lounge area. One of the lodge owners welcomed us with a cold drink and showed us to our little thatched bungalow. It was basic but clean. No windows, but mosquito nets over the beds and fans – thank goodness because it was pretty hot.

The next day the lodge arranged a boat trip to the nearby Tatai Waterfalls. Several others who were staying at the lodge plus a guide and dog from the lodge accompanied us.

The boat trip took about 30 mins and we could see that development was gradually coming. There were several clearances in the jungle on the bank of the river where it ran close to the main road. On the other side of the river, though, it looked like impenetrable jungle.

Eventually we rounded a corner to see the rock wall rising from the river with the waterfall cascading down it. It was surrounded by jungle and there were small waterfalls spilling over everywhere.

While we were swimming, another boat arrived with some more tourists. I watched as their guide led them to the top of the cliff. He indicated that you could jump then did the most impressive backflip off the cliff into the rockpool. My jump seemed a bit lame now!

Kayaking with kids on Tatai River

Our fellow lodge guests either headed back on the boat or into the jungle on a guided trek. We had decided to kayak back to the lodge. Two tandem kayaks had been towed behind the boat for us to make our return trip. We jumped in for the paddle home. Rachel and I were both a little concerned how long this would take. The boat trip to get there was not exactly short.

I had Amelie in the kayak with me and we gradually got into a rhythm where we paddled at the same time, did not clash paddles and even went in a reasonably straight line.

A small headwind had come up and made it tough paddling. There were numerous complaints from the front of my kayak but there was no plan B so onward we went.

On the way we saw birds, fish and the odd boat traversing the river. Despite some complaints it was a fun trip back, although slow. The kids were quite young and it took a fair amount of distraction and encouragement to keep them going. I was very relieved when we finally got to some huts that I recognised.

The other guests who went on the jungle trek returned several hours later sweaty, tired and with leeches attached. The kids watched keenly as the blood suckers were removed. By all accounts the trekking was fantastic.

We spent the next day chilling out at Rainbow Lodge. The favourite activity for the day was jumping off the jetty and floating down the river before getting out and repeating.

We also enjoyed swimming in the river, paddling on surf skis and reading by the river. The river is peaceful and there was very little noise – so different from most of Cambodia!

Later we played some of the board games in the common lounge area. The lodge has a wonderful laid back vibe and we enjoyed relaxing by the river.

In the late afternoon we took a boat down the river on a sunset cruise. The river widens further along and we passed a few other lodges further downriver.

Several had over water bungalows that looked a fair bit fancier than Rainbow Lodge. Not that I am complaining, we loved Rainbow Lodge and highly recommend it.

Enjoy the photos and consider visiting Tatai River for an alternate adventure off the beaten path in Cambodia. It was a lovely change from the busy-ness of the bigger cities in Cambodia and was one of our favourite stops in our three week trip to the country.

Do you have any questions about travel in Cambodia? Comment below!

If you are planning a trip to Asia you may also like:

Sorry, no posts were found.

Co-founder and occasional writer for Adventure and Sunshine, Matt is a curious traveller, interested in experiencing the many wonders of the world and broadening his perspective. He encourages others to travel and get out of their comfort zone and loves the bonds and memories of family travel. He caught the travel bug at age 4 during an 8 month trip around Europe in a campervan with his family.

1 thought on “Kayaking with kids on Tatai River, Cambodia”