We have arrived in India and I can honestly say the country is unlike anywhere else in the world I have travelled. We are at the end of our second week in Northern India and it feels like we have been here far longer! I haven’t caught up completely with the blog, so below is my summary of week one.

We landed in New Delhi late at night. The hotel gave us very specific instructions on which exit to use in order to avoid scammers pretending to be from the hotel. They even provided a password to exchange with the driver to make sure he was the real deal!

On our flight over to India we realised that the outward flight we had booked to Mauritius was 1 day past our 30 day India e-tourist visa. It was a silly and expensive rookie mistake that we won’t make again! After experiencing huge delays getting through customs in Thailand (over 2 hours of chaos) we were pleasantly surprised with the short queues and friendly Immigration staff in India.

After agonizing over how to approach the visa issue with Immigration, Matt bravely broached the topic as the officer was stamping our passports. The Immigration Officer was very helpful and even suggested waiting to enter until after midnight.

However we were in a no-win situation as we were entering India on the last day our visa entry was valid.. Matt suggested he might give us an extra 2 days on our visa, but unfortunately it was not to be. So we would have to change our flights to Mauritius.

As we left the airport, the city descended on us. The only way I can describe it is gritty, dusty, chaotic and wildly noisy. Small run down mini vans, trucks and auto rickshaws hurtled down the road surrounded by an eerie orange haze.

Our hotel for the night was Hotel Amax, tucked away in the Paharganj area of Old Delhi off Arakashan Road. Our driver weaved his van through tiny little alleyways littered with rubbish and the occasional cow that were thankfully uncongested due to the lateness of our arrival. We fell into bed after 1am and lay listening to the horns tooting, the dogs howling and wondered what we would wake up to in the morning!

The country really is an assault on the senses. Noisier than any country I have visited. Stunning colours everywhere – the red earth, the women dressed in sarees every colour of the rainbow. Smells ranging from the foul to the gorgeous scent of aniseed and sugar offered after a meal. The food is amazing.

We have so far stuck to vegetarian fare and have eaten everywhere from highway shacks to street vendors to restaurants and hotels. The country is hot, dusty, dirty and busy day and night.

The people are very friendly, but in a week we are already more suspicious of the friendliness. It is too often the precursor to a request for something – money, a visit to their shop, guiding services.

I am trying to keep an open mind but the hustling is relentless and draining. It is very difficult to separate the scammers from the genuine article and I am quickly becoming disenchanted.

The good news is the kids are extremely popular with adults and kids alike. We haven’t come across many other families travelling so they are a bit of a novelty to the locals! Everyone wants to shake our son’s hand and many people have asked for their photo with them. The kids are learning that everything is up for negotiation (unfortunately with us as well as the locals!) and they are getting better at haggling down the prices in the bazaar.

After a quick look around the sights of New Delhi we decided to leave the city. There are a lot of different options for travel in India, but we decided to hire a driver to get us to Orcha as the trains were fully booked and we weren’t keen on the bus.

In Orcha we had arranged a 3 night stay through Orcha Homestay. This is a great initiative where visitors stay with local families in the small village of Ganj just outside Orcha. The host family receives all money from the meals purchased and a portion of the accommodation fee. It provides the local villagers with some much needed income and the visitors with a unique experience in India.

The family we stayed with had three children, aged 15, 12 and 8. The kids were over the moon to have some other kids to play with and our son quickly suggested a game of cricket!

Each day the grandmother cooked breakfast for us, we would venture off to explore the town and the temples then we were back for some backyard cricket with the boys and the cow. The kids got good at rescuing the ball from under the cow and tried hard to work out the rules of the local game of tiggy!

We ate dinner with the family each night and slept in a cozy mud hut in the family compound. It was a fantastic experience and we were really glad to have had the opportunity to go.

Agra and the Taj Mahal

We left Orcha for Agra and our much anticipated visit to Taj Mahal. Our drive to Agra was eventful and the 5 hours went relatively quickly as the kids were entertained once again by the cows and goats wandering across the roads and the highly decorated trucks with the insanely loud horns that they use constantly.

The drive is sometimes a little precarious as our driver weaves his way through traffic any way possible – dodging pedestrians, cows, trucks and motorbikes coming down the wrong side (although there doesn’t seem to be a right or wrong side!!). The kids count how many people can fit on a motorbike, in a car, on top of a bus or in an auto rickshaw.

We arrived in Agra late in the day and had a brief glimpse of the Taj Mahal, but waited till the morning to visit. We weren’t disappointed.

The Taj Mahal is simply magical. We were so excited to visit. We arrived super early and were lucky to enter with the first couple of hundred other visitors.

It was a clear day and despite one of the minarets being covered in scaffolding, nothing could take away from the beauty of the Taj Mahal. It is so serene. This is possibly magnified by the fact touts aren’t allowed to enter and the grounds are large so you can’t hear the traffic!!

Enduring the hustle at Fatehpur Sikri

On our way to Bharatpur that afternoon we visited the red stoned ancient city of Fatehpur Sikri. The mosque, palaces and surrounding gates are well preserved and beautiful examples of persian architecture.

Despite the beauty of the fort it was a really frustrating experience due to the ridiculous number of touts inside and outside the fort. We could not walk 5 metres without someone harassing us to pay them to guide us around, tiny kids offering all manner of trinkets, older kids pressuring us to hand over our tickets when we left (to resell I assume).

It was exhausting and the kids found it quite confronting. Anyway, it was worth the stop despite the hustling.

Checking out the bird life in Bhuratpur

Our driver could not understand why we wanted to stop at Bhuratpur. I get the feeling he isn’t really into nature! We stopped in Bhuratpur to visit the Keoladeo National Park, a world renowned bird sanctuary. To be honest I was pretty sceptical about what we would find as so far in India the only wildlife we have seen are cows, goats and stray dogs!

We hired rickety old bikes plus a guide with a mega telescope and a great eye for finding birds (who 15 minutes into our session informed us his rate was actually 50% more than he had agreed to at the gate…).

Despite being annoyed that even the bird watching guides are extorting us, we were shown a heap of rare birds that we would never have sighted ourselves. It was a nice change from forts and temples and it was great to be outside without nearly being run over by a motorbike.

We have just spent 5 nights in Jaipur and moved on to Bundi and will post a blog soon on week 2! Our itinerary for the rest of our stay in India will most likely include Udaipur, Jodphur and Jaisalmer.

We are pretty much making it up as we go along and finding accommodation when we arrive in each destination. We haven’t had any trouble finding places to stay, in fact there seem to be guesthouses everywhere.

We have some birthdays coming up, so it should be a fun couple of weeks. We are hoping to slow up a little as it has been a hectic week, but not sure if we will ever adjust to the craziness of India! 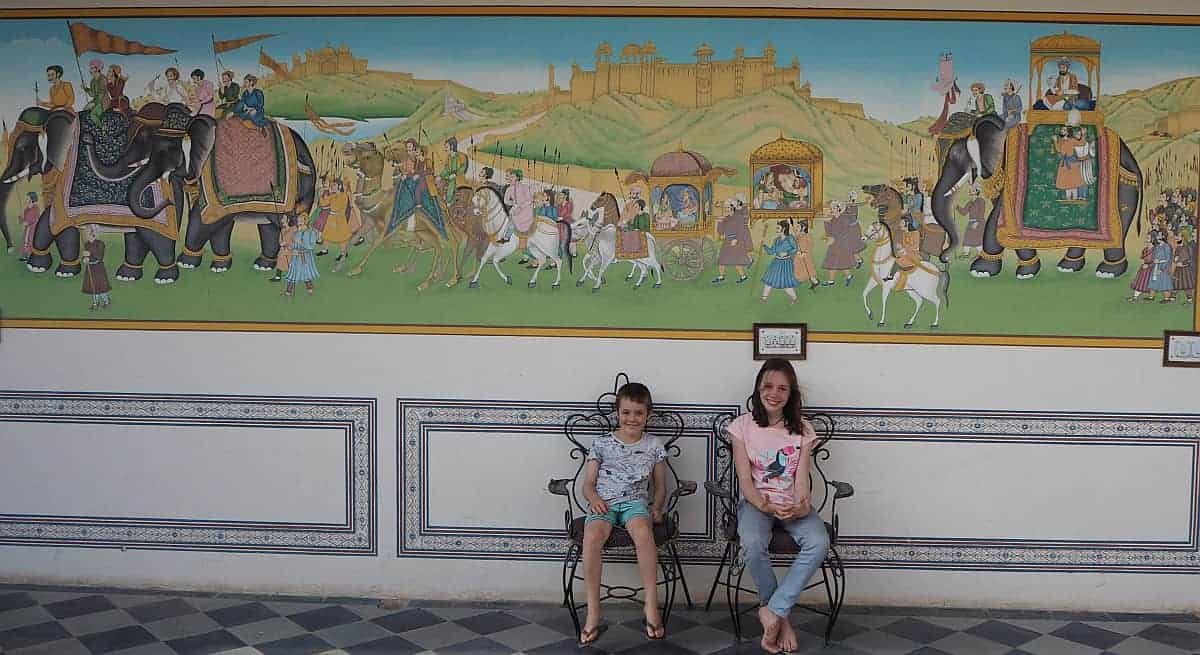 1 thought on “Surviving our first week in India”